BRINTER IN THE NEWS

Bone and muscle tissue cannot be printed in the same way 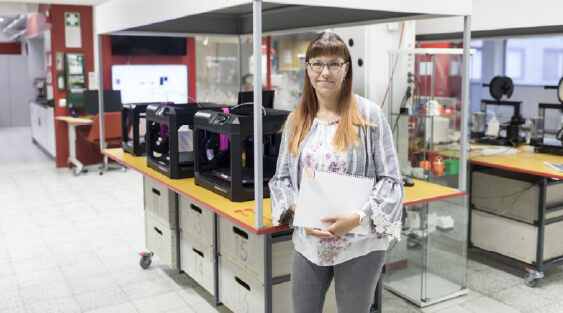 Someday bioprinter will print a new liver or pancreas for a human patient. At least this is the ultimate goal of the 3D bioprinting research running hot at the moment.

While still waiting for entire organs to be bioprinted, small pieces of tissue, such as skin, liver, or muscle tissue can already be printed. For the time being, these tissue models are used for tissue engineering research and for toxicity testing various chemicals and drugs.

She is working as an expert in a small Finnish start-up, 3DTech, and helping to design a bioprinter, which combines several different bioprinting technologies and printing nozzles into a single platform.

“Tissues are ensembles of similar cells that work together on a specific task suspended in an extracellular matrix (ECM). The composition of the ECM determines the mechanical properties of the tissue, such as elasticity and tensile strength”, Turunen explains.

“Bone tissue is relatively stiff and tough, whereas muscle tissue is elastic and soft. Thus, the materials mimicking those tissues, i.e. the bioinks, have to bioprinted with different techniques.”

Cell especially are vulnerable and soft. Some of them die during the printing process, if they are printed using too high pressure through very small nozzle.

Turunen is trying to determine, what kind of a hydrogel would be the best for maintaining the cell viability and which bioprinting technique would be the optimal choice for to depositing them at proper location: pneumatically, mechanically or by some other way driven system.

After printing, tissue constructs are cultured in the lab. Gradually, the tissue maturates and starts to function as a biologically active entity.

Turunen met the founders of 3DTech about a year ago in a joint meeting about bioprinters. At the time, she was finalizing her doctoral dissertation about the fabrication of microstructures with a laser-based 3D printing.

After the meeting, Turunen got an idea that with the PostDocs in Companies (PoDoCo) grant she could work as a researcher for 3DTech. The aim of the PoDoCo program is to promote the employment of young doctors in industry.

The grant application was successful. During the two-year project, the first year is funded by The Finnish Cultural Foundation and the second year salary comes from 3DTech. After the PoDoCo period, Turunen is likely to continue to work as a research scientist for 3DTech in a regular employment relationship.

More information about PoDoCo grants available in the website www.podoco.fi/

D.Sc. (Tech.) Sanna Turunen was awarded a PoDoCo grant of € 28 000 for post-doctoral research about combining 3D bioprinting techniques in 2017.